I guess that this religious group forgot about the book by Robert Frank Heizer?

The Destruction of the California Indians

This book is only reporting about Mormons and the indigenous peoples of California.

What about the rest of the country?

Pick your book then read the rest of this story?

According to a story in The New York Times (October 31, 2013), Mormons are making efforts to share goods, companionship, and the promise of identity among peoples who have suffered jarring circumstances ever since “white people” came across them.

This is as it should be because the church people where big abusers of the native people plus took the children as slaves and to be sole.

The Mormons vs. HBO

The Destruction of the California Indians by Frank Heizer.

The book is a sad recount through news stories and letters of the period in California history when Native people were not only losing their land and their culture, but their children as well, to the Gold Miners, the Mormons and the U.S. Military.

The Mormons have historically not been very Christian towards the Indigenous people of this country.

The story if you wish to read about it, is in the book:

The Destruction of the California Indians by Frank Heizer.

The book is a sad recount through news stories and letters of the period in California history when Native people were not only losing their land and their culture, but their children as well, to the Gold Miners, the Mormons and the U.S. Military.

The Mormons called the Natives savages not fit to raise children and took them, making them into their own personal slaves and selling the leftovers to others to be used for the same purpose.

Everybody took something from those who asked only to be left in peace.

Now, these same Mormons, are quite upset with HBO for filming what they consider to be a sacred ceremony, the Endowment Ceremony.

Excuse me for not being too empathetic.

My people have been fighting with them about this same kind of insult, since the Europeans first landed on this Continent.

Outsiders have for centuries, barged into our sacred ceremonies, killed our people when not allowed to take part in them and in recent times, filmed whenever and wherever they felt fit.

No one has ever screamed out for our rights about this.

What is that saying about Karma? My advice to the Mormons is

“Walk a mile in my moccasins”.

We, the Natives in this country, have at least three thing to learn from our neighbors.

First, If you wish to succeed with getting your point across with any protest, hit them where it hurts.

Second, we must learn how to go about becoming united in one cause at a time.

Third, remember cause number one an two.

Someday you may need their help in your protest?

Find out who is selling to Whiteclay and NEVER buy their products, no matter where in Indian Country you live.

Budweiser and Coors are just two.

This is not asking too much because there are only a few buildings in Whiteclay. 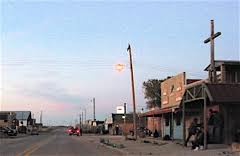 Pine Ridge, like the Keystone pipeline is a problem for all of Indian Country.

We as a people have allowed this situation to go on for far too long.

No, we cannot shut down Whiteclay Nebraska however, we can refuse to buy anything from companies that cater to those PEOPLE in Whiteclay.

I see no reason to add to this article Brenda has said it very well.

The major Native newspapers continue to use non-Indians to write their headline news stories, journalists who drive out to Indian land, churn out a story, collect their paycheck, and then leave.

Indian Country Today has used a ‘reporter’ in the Southwest that I has never been out on a news story in the past 30 years.

Reporters all over the world are dying and being jailed to report the truth, in the US, many reporters for the Native media are doing as little as possible to get a paycheck.
–Brenda Norrell, Censored News

Is This Ignorance Or Malice, You Decide

Recently there have been two places of Native American Cultural significance,
or to us, Sacred Places, that have been abused by Non Native people,
representing the U.S. Forest Service.
One was in the Deep South, in Georgia, the other in the Far West, in California.
The thing that these two events have in common, is a seemingly complete lack of respect
or awareness, of just how important these places were and are to Native People.
I have personally seen this kind of shameful lack of respect for our Sacred Places,
while attending a Celebration Event at the Natchez Sacred Mounds in Louisiana.
For longer that I care to remember, I watched in total shock while people,
who did not appear to be Natives, both adults and children, played a game
of football on the top of the Sacred Mounds.
No one in the area who saw this happen, seemed to find anything wrong with this
and this is a memory that I cannot ever forget.
Standing together has never been one of our strengths, but if we as a People, as a race,
do not join hands across this country, these Sacred Places, as well as our very being,
may soon become like the dust blowing in the wind.
If you are able, please write, call, blog, do something, do anything, just get involved,
but please, please, do not ignore these things.
It is never going to stop unless and until, we as a People stop it.
My ancestors, your ancestors, are watching and waiting for us to unite and
once again become the strong, proud, First People of this Country.
We cannot remain silent anymore.
US Forest Service Employees Vandalize Native American Town
Armed Agent Desecrate Sacred Fires

First please except my deepest apology  for what you are about to read.

I am so upset with people from outside of New England and/or non native’s, teaching us poor dumb natives how to be a Native American!

This is the reason why, since getting out of the service, no boss could get me to go to college!

One even would have paid for the first four years, if I stayed with his company!

Of all things, Professor Tallbear is a female and an “Indian”?

Women have been maligned since the beginning of time and Native Americans ,like dirt since first contact so, to read one of our own speaking so much half truths is unacceptable!

There are so many half truths we should work with only the truth?

High Cheek Bones ( in many people they are no longer dominant because of  European mixing with our blood).

“The tyranny of the one-drop rule poses a specific problem” ( is a government imposed way of assimilating the Native American, including our people thinking like this professor).

“Elizabeth Warren doesn’t not look Cherokee by Cherokee Nation standards at all,” ( Cherokee people gave into the government long ago and excepted their fate just to survive the hard times they took the cowards way out).

“The majority of white people in Oklahoma say, I’m Cherokee” Well DUH ( Just where do you think the trail of tears ended up)?

On what was at that time a dry, cold piece of dirt not wanted by the government, is it any wonder why so many are in-fact Cherokee?

“If you ever want to know if someone’s black or not, go ask their white neighbor.” ( TRUTH) however, she needs to step away from that casino long enough to look around at all of the New England Native Americans that were assimilated by Viking long before first contact, Oh right, the 1% rule again!

Then on her way back to the collage stop in on my brothers & sisters the Shawnee nation, take pictures and then write another report! Like that will happen, when cows fly.

No, I am not now, nor will I ever be recognized by a government or casino Indian 1% rule.

Please, no more Lakota or Dakota coming to the East Coast to tell us how to be a Native American, we did OK before your people arrived thank-you.

“When you are Native American and your last name is Tallbear”

Yes, I do have an opinion about US Senate candidate Elizabeth Warren and her blood line however, you must ask her.

You see, I took my opinions directly to her.

Checking his record one can see why Senator Brown must find fault with the competition however, outsiders should remain outsiders!

“My name is Walkingfox and I am a Native American”!

Walkingfox ( a white person‘s name because, a Traditional Native American can never reveal their Creator given prayer name).

This past month (December) there was a change at the top of my Native American teaching blog questions.

Questions about native American naming was by far the most asked about question.

Are you wondering why?

Because of a life time of powwows, paw-was, and gatherings (from 6 to 71 years) I believe the answer lies in the fact that Indian country is now inundated with far too many phony Medicine men and women looking for ways to part you from your money!

A true Traditional Native American Elder charged with the burden of receiving names from Creator to a new follower, must never charge for doing Creators business, NEVER!

If there is a charge, you are facing a phony!

I love this question!

It is number one on my list of extremely important questions!

I have many websites and blog posting about Spiritual leaders however, nothing about their blessing anything?

Because, no person can bless anything!

It they do, they are not Native Americans, defiantly not Spiritual leaders!

We can only clean and clear things and pray for Creators blessing.

We cannot give Native American names, Bless weddings, Funerals, gatherings, powwows on anything else, our job is to obey creators wishes!

A TRUE LEADER LEADS WITH A SERVANT’S SPIRIT!

I am pleased to be able to teach as much as possible about my traditional ancestors.

As you may or may not see while traveling around the internet, some teaching about our people will not compute with what the elders taught as the truth, many times often taught by non native people or not from my tribe!

The beauty of a Matriarch society

In this tribe women are equal to men and many time in higher offices in their form of government.

So a reservation (the Southern Ute reservation) is just what my elders ( Mohegan ancestors) have been calling it all along, a concentration camp for indigenous people?

Her white husband had to shoot her to finally be arrested in New Mexico and then he was treated as a first-time offender.

Why? Because all the domestic violence took place on the Southern Ute reservation.

Under a 1978 Supreme Court decision, non-Indians cannot be prosecuted by tribal courts for crimes committed on tribal land.

So what good is this camp except for whites at casino?

Welcome to the visitor looking for the Definition of Aquine

You found out that if you wish to know about Native American information you have three choices.

You can use a search engine, using the correct question.

What is the meaning of the word Aquine?

You can go to that traditional native tribe for your answer.

However, by using a non native dictionary you will find out that it is sometimes a hit or miss situation