The little team that could!
DID!
Sachems word for the day
http://wordsfromsachem.wordpress.com/2014/01/02/a-little-team-from-where/

Welcome to the visitor from the City of San Diego California

To my postings about our Friendship pipe.

I am not sure who it is that wants to lead a pipe however, until a teacher knows this the sacred parts are always blank?

Sachems word for the day

The United States of America‘s Rich want what countries like Mexico and Cuba has had for centuries!

I am ready for the next answer to my question?

Why was it that we should not have the NSA?

Sachems word of the day

“Get the Receipts, maybe you can Return some”.

Maybe at the end of this year we should ask Father Time?

Sachems word of the day

We are heading back to before the 1920’s

Words from your Sachem

Happy Holidays to the good state of California.

when it comes to

‘a change for the good’

It looks like this coming year they will be keeping up their tradition?

This posting is about good people being disenrolled!

Disenrolled, discarded, to cast aside, dispose of, get rid of, to throw out, a person or thing that is cast out or rejected.

Because by doing so the people doing this (their own people) will be rewarded by the conquering nation!

For most of my life I have picked up the torch from my elders to stumble through my time on Mother Earth to help make right the wrong done to my ancestors.

Today is no different. 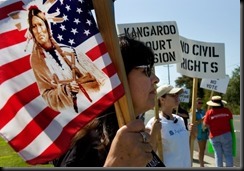 They may comprise less than 1 percent of California’s 38 million residents, but the state — perhaps surprisingly to many — has the nation’s largest population of Native Americans,

The state-by-state and tribe-by-tribe reports list 352,427 American Indians and Alaskan Natives in California, and only Oklahoma’s 313,305 approach California’s numbers.

The reports also reveal that California’s Native American population represents hundreds of specific tribes and sub-tribal groups, with tribes from Mexico, at 45,933, the largest single grouping, followed by Cherokees at 20,969. However, 126,425 Californians identified themselves as Native Americans in the 2010 census without designating a tribal affiliation.

Lois Edwards stands with demonstrators out front of an Enterprise Rancheria tribal meeting,

where the Enterprise Rancheria General Council met to vote on the citizenship of approximately 70 tribal members who were disenrolled in 2003.

Many of those protesting had been disenrolled.

All but the natives of this country are recognized as being human beings?

Disenrolled, discarded, to cast aside, dispose of, get rid of, to throw out, a person or thing that is cast out or rejected.

My website at tripod is a blessing and a curse.

Because of this I will once again split my answer into two parts.

A blessing because my 1993 SNET website (Southern New England Telephone) company was sold and is no more.

My 1995 EarthLink was a great website except it is only using dial-up connection, so this is now the oldest of my websites.

So when questions are asked sooner or later it makes its way to this website.

The curse is that because that program was sold and I can no longer update it or answer questions on it, I will never know if the person asking the question will ever see my answer.

Not that I am by any stretch of the imagination an expert, they can at least read and compare answers?

Thank you to the person from City Cairo Al Qahirah Egypt

Why is it wrong calling an Indian circle an arena and why is the way in not a door?

I do not know if the people in India have a circle or if so what they might call it However, the question seems to be directed towards Native Americans because of the many websites that they looked it?

To answer this question and insure a complete understanding as to why this is important one must think ancestors and dig back into past websites and blogs.

OK so, remembering that Paw paus and Powwow belongs to the first people of this land and that I speak only from my teaching from elders around the New York, New England area, this ceremony does not belong to outsiders, if you are an outsider you cannot have it!

If you change it then at the moment that you do, it is no longer a Paw paus or a Powwow, it is a watered down gathering to make money for you, period!

The U.S. Senate this week unanimously passed the Native American Memorial Amendments Act of 2013, introduced by U.S. Sen. Brian Schatz. If signed by President Obama, a memorial could be in the works for the National Mall in Washington, D.C.

“In every conflict since the Revolutionary War, Native Americans have answered the call to serve and defend our country. It is long past time for our nation to honor the uncommon contributions of Native Hawaiian, Native Alaskan, American Indian, and other native veterans,” Schatz said in a press release.

According to Schatz’s office, a memorial was established more than 20 years ago but has languished “due to some funding and logistical problems.” With the bill’s passage, the National Museum of the American Indian can accept donations to privately fund the memorial.

Does this also include the non Government Native Americans that served this country?

In this short/long life time I have met and befriended thousands of true traditional native Americans around Indian country not recognized by this government?

So, this means that not only are they not going on this government memorial, all of their ancestors that faithfully served this government also will never be welcomed home with a thank you for your service?

Many, if not most of my native friends throughout the resent years that served, are recognized on military memorial.

However, they will not be on this memorial?

This should not be acceptable!

Whose father was a Cherokee chief until he married a non Cherokee, served in Korea and Vietnam, Chuck Finch (Charlie Finch) a Passamaquoddy served in WW-2 and the Koran wars, my Uncle Russ a Penobscot served in WW-2 just to name a few and yes I do know of hundreds if not thousands more if you are interested?

Point being that I will never give up the fight to return all of our native peoples, military and non military, back to the land of respect and the land that Mother Nature and Kiehtan our Creator or new name Mundu Weego has given to them all.

A land that is not only in the hearts of the people but is now known as Indian Country.

AHO ( Peace to all in the coming New Year from Shechaim Ohjieshan of the Mohiigan people).

Did smudging begin with natives of America or witches

This to me is an extremely important question to be answered with as much care as possible.

Please understand that all questions are very important to the person asking and I do take each one into my heart and do the best that I can to answer.

This question is why my Supreme Being demanded that I do whatever it takes to keep the words of the ancestors alive and at the ready for all to see and challenge.

Kiehtan, we call our Creator wishes answers to all question. https://sachemspeaks.wordpress.com/kiehtan-creator/

This question, for the most part, depends on who you are asking and which god do they worship?

I see from my tracker that there really was no answer, not even at the site that I wrote many years ago.

This is what I know,

Until my grandfather made trips out to some of the western tribes,, because of many request, smudging, as it is now called, was not known to my people at least not with sage and/or sweet grass.

Our tobacco can be used at any of our ceremonies because there is no need for a fire.

From what I have been told by my elders, natives west of the Mississippi river have used them, sage and sweet grass, for as long as anyone in my family circle can remember.

I also personally know from some of my visits to the United Kingdom while in the navy back in the 60’s, that Celtic clans have used smudging for as far back as my sponsors at their ceremonies can remember?

Thank you to the City of Yorktown Heights New York

Did smudging begin with Indians or witches?

So to answer this question please let it be said that our traditional elders preferred our herbs over smudging even though sage and sweet grass was incorporated into our herb ceremonies by my grandfather back in the late 40’s.

No fire would be used, in our case traditional Native Americans around the Uncasvillage area, witches were the first to smudge with sage and/or sweet grass, in fact this was our way of telling if we were invited to a traditional and a occult gathering.

Side note, this government has no problem with our prison visits for ceremonies mainly because of our use of herb instead of fire.